Could YOU Spot a Cheater? Study Finds Men Can Tell Which Women are More Likely to Have Affairs Just by Looking at Their Faces

They say you should never judge a book by its cover. But men may have an inkling about how faithful a woman is just by looking at her face, a study suggests. Could YOU spot a cheater?

By studying photos of 34 women, the male participants were able to successfully identify which of the women had previously cheated on their partners in 59 per cent of cases.  The research was carried out at the University of Western Australia, led by Samantha Leivers.

As part of the study, the researchers asked a group of men to briefly look at photos of 34 women, but gave them no additional information about them. The photos were shown in pairs – one of the women had cheated on a partner at least twice in the past, and one had always been faithful

‘When asked to choose the more faithful of two women they performed significantly above chance,’ said the study, published in the journal Plos One.

From an evolutionary perspective, it makes sense that men would have evolved the ability to spot a cheater because men can never be sure a child is genetically theirs, the researchers said.  That is, they could spend all their time and energy raising a child that is not theirs – and therefore would not pass on their genes – if their mate were to become pregnant by another man.

‘It would be adaptive for men to have evolved the ability to predict or detect unfaithfulness in a potential partner,’ the experts wrote.  ‘In summary, we show for the first time that men’s judgments of faithfulness from images of women can contain a kernel of truth when they are able to directly compare images in a forced choice task, although accuracy did not generalise to all pairs of women. ‘Previously, accuracy in faithfulness judgments has only been found for women judging men’s faces. ‘It is striking that men were able to show any accuracy from images alone after only a brief presentation, considering that accuracy in faithful judgments made from behavioural information is relatively poor.’ 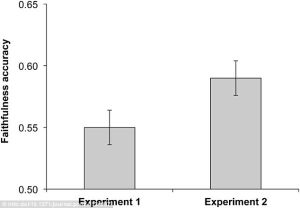 Previous research has indicated attractiveness can act as a cue to how faithful a women is, but this study found no correlation between the men’s judgments and those women rated as more attractive.

A study published last year found that we tend to judge someone with high eyebrows and prominent cheekbones to be more honest, while we are less likely to trust someone with a furrowed brow and sunken cheeks.   The psychologists from New York University also found that a section of the brain decides a person’s trustworthiness even before we have consciously perceived who they are.

The brain takes just 33 milliseconds – three hundredths of a second, or a tenth of a time it takes to blink – to decide whether someone is to be trusted.

The reasons why the men in the University of Western Australia study rated faces in a particular way is not clear, however, and further research is needed into what cues men look for when assessing how trustworthy a potential partner is.

« How to Cope With Being Cheated On